The husband-and-wife contractors and HGTV stars, Chip and Joanna Gaines, had the #1 selling book in the country last week. Their The Magnolia Story, written with Mark Dagostino, sold over 121,000 print copies in its first week on sale, according to Nielsen BookScan, which tracks about 85% of print sales. 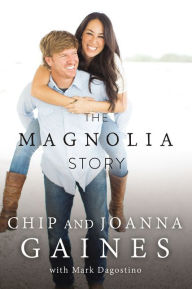 The couple rose to prominence on the HGTV show Fixer Upper, where they rehab homes in Waco, Tex., for local buyers. (Their construction and design company is called Magnolia.) Thanks to the notoriety they have gained from the show, the couple is beating well-established authors on the charts. The Magnolia Story sold nearly twice as many copies of last week’s #2 seller, Killing the Rising Sun by Bill O’Reilly and Martin Dugard, which moved just under 46,000 copies.

The Magnolia Story also had a good start in both the e-book and audiobook formats. The e-book, with bonus content, was the #7 seller in Apple’s iBooks store last week, while the unabridged audiobook was in third place on Apple’s audio bestsellers list.

The Gaines’ book recorded its highest sales in the Dallas/Waco area, where it moved 4,675 copies, or about 4% of its total sales.

The Magnolia Story is the first book by the couple, and publisher Thomas Nelson said the book “offers their fans a detailed look at their life together.” Nelson said it has run through its first printing of 700,000 copies and has gone back for a third printing which will put the total number of books in print at over 1 million.

The proliferation of internet pornography is forcing yet another legacy adult magazine to rethink its business model. Penthouse will cease production of its print magazine, henceforth becoming a digital-only operation, publisher General Media Communications announced. No other details on the transition were given, although an exact end date for the print publication has yet to be determined, according to FriendFinder Networks CFO, Ezra Shashoua.

Amazon has long featured bestseller lists track sales ranking by the hour, but what the e-commerce giant has lacked is a weekly list. That changed this week with the launch of Amazon Charts, a new feature that will include not only the top 20 bestsellers at the retailer in both fiction and nonfiction, but also the 20 most read books in both categories. Adult books and children's books will be included on the lists. The "most sold" chart will rank bestsellers based on aggregated sales (including pre-orders), as well as books borrowed. Sales will be based on activity from all of Amazon’s platforms (Amazon.com, Audible.com, and Amazon Books), and across all formats (print, digital, digital audio and books read through Amazon's subscription services). click Read More below for more of the story