“It’s probably the only place you’ll see Dolly Parton in a van talking to Kermit the Frog.”

So says John Piper, VP of Macy’s Studio, whose team is busily putting together the Macy’s Thanksgiving Parade from a cavernous factory in Moonachie, N.J. Mr. Piper, who has done this for 35 years, laid out some mind-blowing logistics of how Macy’s coordinates all those balloons, floats, bands and celebrities along Manhattan streets on Thanksiving Day. Mr. Piper, along with a team from Ram, which is the “official vehicle” of the event — meaning it is providing 75 trucks to tow the floats — gave Ad Age a sneek peek at some of the stunning statistics on what it takes to put on the annual spectacle.

One first-timer in the parade will be KFC, which is representing Colonel Sanders’ road trip in a 17-foot white Cadillac (sorry, Ram) from Corbin, Ky., the site of his first KFC restaurant, to New York City. The float is marked with the routes taken and, of course, the colonel himself is aboard. Mr. Piper said the float is three bus lanes wide and 12 feet tall. It is partly disassembled for transport to New York City for the parade and takes five boom cranes to put together. 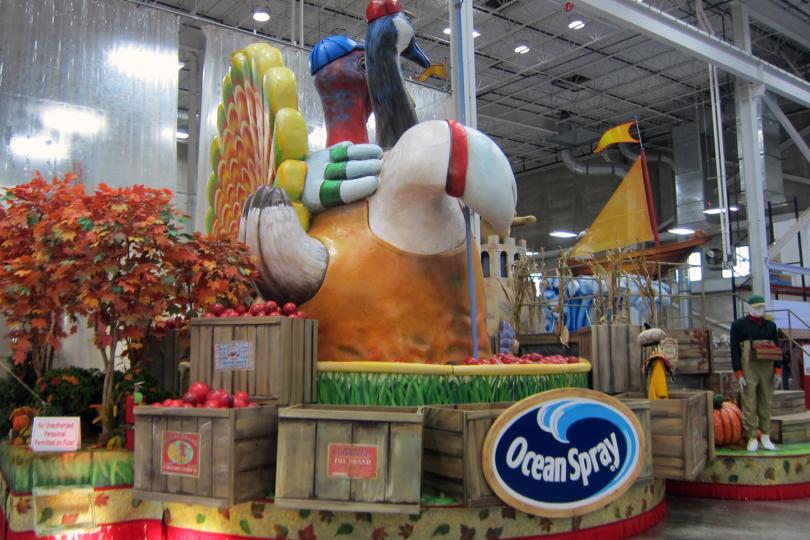 Other branded floats this year: Hallmark’s recreation of a home at Christmas complete with a fireplace that looks like it’s actually burning (Mariah Carey will ride this float); a huge Ocean Spray Cranberry float with an enormous goose and turkey wearing waders for the bog (the band Train will be aboard); a Peanuts float complete with Charlie Brown’s sad little Christmas tree celebrating the TV special’s 50th anniversary; and Build-A-Bear Workshop float that features a bear astronaut.

All of them will be pulled by Ram trucks. When asked whether people would actually notice the trucks in the parade, Todd Brown, brand manager of the Ram 1500, said they would. “The parade shows our capability and style in a different venue than consumers are used to,” he said.

Here are some fun facts and figures about the parade.

According to a new survey, more than half of swing voters responding (58 percent) said direct mail is either “very helpful” or “somewhat helpful” in deciding how and whom to vote for, beating out television (55 percent), online (48 percent) and email (46 percent). Approximately one of three registered voters surveyed identified as a swing voter. Among those surveyed, 14 percent said they were “undecided,” and 18 percent said they “might change their minds.” Not only do swing voters find mail helpful, the majority of them read it. The online survey, conducted by Summit Research, found 54 percent of swing voters surveyed say they read political direct mail immediately upon receiving it and 24 percent will save it to read later. There’s opportunity for campaigns: 52 percent of swing voters surveyed say they’ve not received any political mail at their residences. In comparison, 80 percent of these swing voters report seeing political television ads. click Read More below for additional detail

The first full shopping week after Christmas, which ran from December 29, 2019, through January 4, 2020, saw unit sales of print books fall 3.7% compared to the similar week in 2010 at outlets that report to NPD BookScan. Only one of the major categories posted an increase in the week. Sales in adult fiction inched ahead 1% over the week ended January 5, 2019, as Where the Crawdads Sing continued to be a strong performer, selling more than 31,000 copies in the week. One new release that cracked the top five sellers in adult fiction was Such a Fun Age by Kiley Reid, which sold nearly 11,000 copies in its first week on sale. Sales in adult nonfiction fell 2.6% compared to 2019 despite a solid showing from The Defined Dish by Alex Snodgrass, which sold nearly 32,000 copies, making it #1 on the adult nonfiction list.