How the US presidential candidates campaign through email 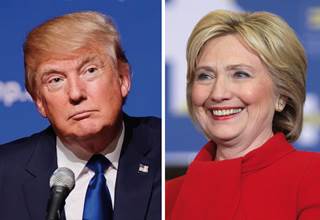 The 2016 US Presidential race between Donald Trump and Hillary Clinton is undoubtedly one of the most unforgettable campaign seasons in the country’s history – for better or for worse. Both candidates have provided signature moments campaign moments, as well as, significant marketing products. From commercials, to social media, to emails, the Trump and Clinton campaigns have established a cohesive communication network with their supporters.

In celebration of the upcoming election, DMN peels back the inbox to look at the insights and analysis of Trump and Clinton’s email marketing campaigns. 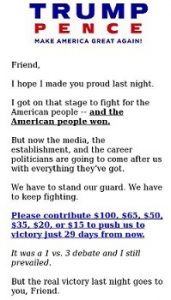 The Trump campaign, according to eData Source*, mails from four domains, whose combined reach is an estimated 10 million. Additionally, the Trump campaign also continues to mail significant volume out of two “borrowed” domains: gopteam.com and ChrisChristie.com. The inbox performance of Trump’s campaign emails is around 70 percent, which is 20 percent less than what eData Source considers acceptably strong. Out of the four Trump domains, one has an inbox rate exceeding 90 percent, while the other three range from 55 to 67 percent. In terms of read rates, the Trump domains provide a range of 14 to 28 percent, a number that exceeds Clinton’s.

The best Trump performers, during the period of Sept. 20 to Oct. 20, was an email marketing campaign with the subject line, “American Won Last Night,” deployed on Oct. 10. Following the second debate, the emails reached an audience of 2.4 million, with an inbox rate of 61 percent and a 28 percent read rate.

Where the Clinton campaign use to out-mail the Trump campaign by 10 to 1, eData Source reported the number has shifted down to an estimated 2 to 1. The Clinton campaign’s inbox performance of 24 percent is 17 percentage points better than Trump’s. However, Clinton’s read rate of 21 percent is 4 percentage points lower than Trump’s. The best deployed email marketing campaign, between Sept. 20 and Oct. 20., read in the subject line: “Sorry to send this.” Launched hours after the leaked tapes of Trump’s groping remarks, it reached 2.5 million people and produced an inbox rate of 90 percent and a read rate of 24 percent.

*eDataSource retains an email productivity service called boxbe, that filters and prioritizes messages in a consumer’s inbox. More than 1.5 million people have signed up to use it. The boxbe service accesses every subscriber’s email inbox about once every 40 seconds . Before it makes any adjustments, it logs all incoming commercial email and response activity—such as whether the message was delivered to the inbox, spam or junk folder, deleted, opened or opened and then deleted. eDataSource has been marketing this service to consumers for more than six years, resulting in a very robust and growing panel that quite accurately mirrors the U.S. online population.

The data is aggregated in real time and displayed in EDS Analyst (our platform). Complex algorithms accurately forecast email volume and segmentation activity for about 120,000 brands, along with detailed estimates of list sizes, deployment sizes and other important statistics across several different industries. Within EDS Analyst, our competitive intelligence application, Competitive Tracker, lets you (in this case, John Landsman our director of strategy & analytics) benchmark engagement metrics, such as read rates, and monitor inbox placement.

One of Two Sides most important resources, the Myths & Facts brochure, has been completely updated with recent facts from the U.S. and Canada. The new brochure also includes two new topics: "Paper based packaging protects goods, reduces waste and is recyclable" and "Many consumers value paper-based communications and do not want to switch to digital communications." There are Two Sides to every story and our carefully researched facts explode the myths and set the record straight about the sustainability of print and paper by using relevant and balanced information. You can download a copy of the new brochure here, or visit Two Side at Booth 3769 at Graph Expo to pick up a copy.

Oil fell on Thursday, on course for its fourth consecutive week of decline, as rising crude supply met the bearish combination of concern over global growth and weak equity markets. Russia is pumping oil at a post-Soviet high, U.S. crude output has topped 11 million barrels a day and a Reuters survey of OPEC production shows the group more than made up for any declines in Iranian shipments in October. “Given these (output) numbers, with Russia pumping hard and the United States and OPEC as well, and we are not really seeing a pickup in demand for another month ... it could indicate we’re back to the good old $70-80 range that persisted through April and August,” Saxo Bank senior manager Ole Hansen said. Click read more below for additional detail.

The Diplomat Revives Mystique of A Bygone Era

The Diplomat, a venerable outpost on the South Florida coast, has been refreshed and relaunched with the help of the Korn Design team. Principal Denise Korn says that her primary goal was to bring back the mystique and ethos of a bygone era, and reintroduce it as a vibrant hub and destination. Her solution is to a combination of “owning the beach” in the new name, The Diplomat Beach Resort, and reinjecting the entire property with a sense of “something new under the sun.”
Archives
Categories
Copyright 2021 - All Rights Reserved
Back To Top
×Close search
Search