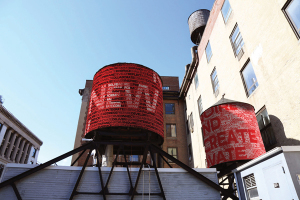 The New School has a new identity. The institution turned to Pentagram and Paula Scher to create the university’s new look and to express its vision as an integrated institution with “design-inspired thinking essential for success in the emerging creative economy” at the center of its curriculum. 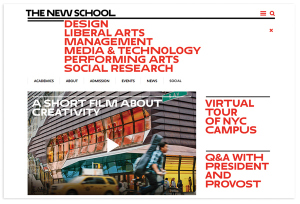 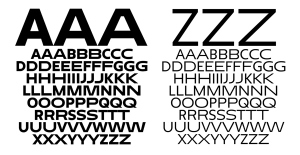 The aesthetics of the identity system are inspired by the architecture and typography of the school’s new LEED certified University Center, while also incorporating parallel lines that echo the horizontal striations of the landmark Joseph Urban building nearby. As part of the identity, Scher commissioned a bespoke typeface from Peter Bil’Ak dubbed Neue.

It is composed of extended letterforms and governed by a custom algorithm, revolutionary in its combination of regular, extended and very extended widths of the same font programmed together and used seemingly at random. Each individual school within the university appears underneath the primary logo. The university also commissioned a Pantone color, Parsons Red, to honor the history and centrality of the Parsons School of Design.

Oil prices steadied on Friday as U.S. sanctions on Tehran squeezed Iranian crude exports, tightening supply even as other key exporters increased production. Global crude oil benchmark Brent LCOc1 was up 30 cents at $82.02 a barrel by 1040 GMT. The contract hit a four-year high of $82.55 this week but has been fairly stable during the third quarter, gaining around 3 percent since the end of June. U.S. light crude CLc1 was 5 cents lower at $72.07 a barrel. It is up more than 3 percent this month, but down 2.7 percent since the end of June. “The fall in Iranian production is set to intensify once the second round of U.S. sanctions come into effect in November,” said Abhishek Kumar, senior analyst at Interfax Europe Ltd.