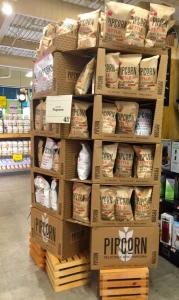 When brother-sister team Jeff and Jen Martin founded their company in 2012, they had no idea they were about to embark on a wild success story with Pipcorn, their innovative mini-popcorn product. Not only is the product unique in terms of its small size—the popped morsels are about half as large as traditional popcorn—but it is also all-natural, gluten-free, whole grain, and vegan. However, despite the fact that the product hit on all the right consumer trends, it’s no easy feat for a newcomer to break into the crowded snack space.

Pipcorn’s first break came in 2013, when Jeff and Jen were offered the opportunity to feature Pipcorn at the Smorgasburg Snack Bar in Whole Foods Market’s Bowery location in New York City. To maximize the opportunity, they realized it would be best to “make their own shelf space”—to get their bags into boxes that could be displayed on the floor, rather than on the shelf. With no immediate solution at hand, the Whole Foods offer was an ideal opportunity with a less-than-ideal expense and time crunch.

Tredegar Corporation announced that it has completed the previously announced sale of its personal care films (“Personal Care Films”) business to affiliates of Fitesa S.A. Commenting on the sale, John Steitz, Tredegar’s president and chief executive officer said, “We believe that in combination with Fitesa, a worldwide leader in nonwoven fabrics, Tredegar’s former personal care business will have improved opportunities for growth.” Cash proceeds from the sale net of transaction costs, purchase price adjustments and transition services are estimated at $45 to $50 million. Net cash income tax costs or benefits relating to the transaction are expected to be negligible. The transaction excludes the packaging film lines and related operations located at the Pottsville, Pennsylvania manufacturing site (“Pottsville Packaging”), which will now be reported within the Surface Protection component of PE Films.

Valmet said that it will supply an OptiConcept M containerboard production line for Yuen Foong Yu (YFY) Packaging Inc. for the company's Xin Wu site in Taoyuan County in Taiwan. The new production line will produce high-quality fluting grades out of 100 percent recycled raw materials. The start-up of the new machine is scheduled for the third quarter of 2016. Jari Vähäpesola, President, Paper Business Line, Valmet, noted, "This high efficient containerboard making line ordered by YFY Packaging will be Valmet's seventh OptiConcept M production line to be supplied globally. The new production line will be able to reduce both carbon footprint as well as energy consumption significantly. The annual production capacity of the new machine will be approximately 300,000 tonnes of board and the design speed will be 1,200 m/min."

The PM6 machine, which has a production capacity of 100,000 tons of recycled containerboard per year, will facilitate greater integration within the Group’s converting plants and significantly increase the energy efficiency of the Los Reyes plant. The investment will enable Smurfit Kappa Mexico to produce high performance containerboard, contributing to the company's competitiveness in an ever-growing packaging market. The type of material produced by PM6 further strengthens Smurfit Kappa’s offering for the agricultural and electrical appliance sectors, where protecting products in the supply chain is key. Click Read More below for additional information.
Archives
Categories
Copyright 2021 - All Rights Reserved
Back To Top
×Close search
Search