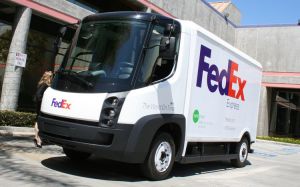 Low gasoline prices and continuing performance issues have slowed the growth of electric car sales. But that has not stymied progress in electrifying larger vehicles, including garbage trucks, city buses, and medium-sized trucks used by freight giants like FedEx.

The clang of garbage cans will still probably wake people way too early in the morning. But in Santa Rosa, California, at least, the roaring diesel engine will be quiet, replaced by a silent, electric motor.

The electric garbage trucks scheduled to begin rolling there this summer may be less alluring than the sporty vehicles that engineer Ian Wright helped design as co-founder of Tesla Motors. But Wright, who left the high-end electric car company to start Wrightspeed, maker of electric powertrains for medium- and heavy-duty commercial vehicles, is on a campaign to force large, carbon-belching engines off the road.

In today’s hyperkinetic world, moving people and things is the planet’s fastest-growing energy-based source of greenhouse gases, with some projections saying that transport emissions could nearly double by mid-century as developing nations industrialize. Climate scientists and policymakers say replacing petroleum-burning engines with alternatives like electric motors is critical to meeting the greenhouse gas-reduction goals set by the international community in Paris last December.

If you haven’t yet submitted your proposal to the 2017 PEFC Collaboration Fund make sure you do so soon – the deadline is just two days away on 31 March 2017. PEFC members and other non-profit organizations are all invited to submit proposals for new and innovative projects. Make sure you check out our Call for Proposals and then send us your application form.

“While a number of uniquely different forest certification systems are used around the world they: 1- have much in common; 2- share many basic objectives; 3- provide an additional measure of commitment to sustainable forestry; and, 4- are effective tools for supporting a responsible marketplace.” Two Sides, the initiative exploding the myths and setting out the facts about print media's sustainability in a clear and concise manner, has brought together facts from a variety of sources illustrate just these points. See below for a snapshot of some of their findings: “There are dozens of forest certification programs around the world. Two programs – the Forest Stewardship Council (FSC) and the Programme for the Endorsement of Forest Certification (PEFC) - account for the vast majority of certified forests and chain-of-custody certificates. These two programs operate around the world.”

Those of you who read The Daily Telegraph may have spotted a familiar name in the Letters to the Editor section on Saturday. Two Sides wrote to the Editor in response to a previous article in the paper about the BBC’s decision to replace paper scripts with digital scripts as part of their ‘green measures’. Here’s an extract from the original article that we, and many of our members and stakeholders, had a particular issue with; Shows such as Casualty have already halved the paper they use from scripts as part of their green measures, estimating they have saved the equivalent of 90 trees. Two Sides works hard to tackle misconceptions about the print and paper industry. Statements claiming that saving paper saves trees are unsubstantiated, misleading and can have a lasting effect on people’s perceptions of paper. click Read More below for additional detail
Archives
Categories
Copyright 2021 - All Rights Reserved
Back To Top
×Close search
Search