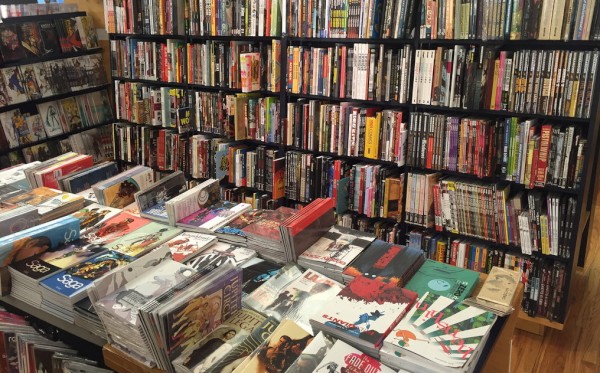 Combined graphic novel and comics sales in North America grew 5% to $1.085 billion in 2016, a $55 million increase over the $1.03 billion reported last year, according to a joint estimate by industry news sites Comichron and ICv2.com.

Milton Griepp, CEO of pop culture new site ICv2.com, cited the ongoing growth of graphic novels as key to the increase: “This represents growth in the broadest part of the market, where increased variety of content is being found by new audiences for comics, including kids and women.”

“As we head into the third quarter, which is historically the busiest quarter in HMH’s selling season, we are encouraged by our results for the first half of 2017,” said Jack Lynch, Chief Executive Officer of HMH. “We experienced strong net sales and billings growth within the extensions of our core Basal business, which are comprised of intervention, professional learning and supplemental products and services, and we took important steps to reduce our fixed cost base and improve our operating efficiency.” Joe Abbott, Chief Financial Officer of HMH added, “We remain on track to deliver against the targets we set at the start of the year and continue to progress our next generation program and platform development in advance of the large new adoption opportunities we anticipate in 2018 and 2019.”

Houghton Mifflin Harcourt announced a strategic restructuring to accelerate its digital transformation and align its cost structure with its digital first, connected strategy. These steps will further streamline operations and better enable HMH to support teachers and students with digital first, connected solutions that drive successful outcomes in remote, face-to-face and hybrid learning environments.“The actions we announced today will help us to realize our digital first vision by creating a more focused company with increased recurring digital subscription revenue that produces higher margins and free cash flow. We recognize the personal impact these actions will have on our HMH team members. We thank our departing colleagues for their contributions and are committed to treating them in a respectful and compassionate way.” Joe Abbott, HMH’s Chief Financial Officer added, “The actions we’re taking are intended to drive billings growth, position us to build our recurring subscription revenue base, simplify and strengthen our business model, reduce costs, and generate sustained and positive free cash flow." The Company’s restructuring includes both labor-related and non-labor expense reductions. The labor-related reductions involve organizational changes resulting in a 22% reduction of HMH’s workforce, including positions eliminated as part of the previously announced Voluntary Retirement Incentive Program and net of newly created positions to support HMH’s digital first operations.